All other college sports!
Post Reply
4 posts • Page 1 of 1 SuperHornet's Athletics Hall of Fame includes Jacksonville State kicker Ashley Martin, the first girl to score in a Division I football game. She kicked 3 PATs in a 2001 game for J-State.
Top

That's fine. It reminds me of a NPR story I heard on the rant the Baylor Women's basketball coach went on. The female NPR reporter talked about how the USA women's soccer team had done better than the USA men's soccer team, etc.

Live with the results. And we all know what the results would be. As populations, men and women are not equal in terms of athletic ability. It's the reality.
Well, I believe that I must tell the truth
And say things as they really are
But if I told the truth and nothing but the truth
Could I ever be a star?
Deep Purple: No One Came 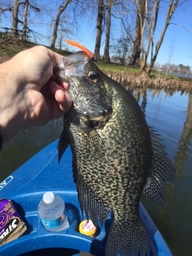 Return to “Other College Sports”