2018 (Junior): Played in all 11 of the team’s games making two starts in the defensive secondary … Recorded 10 total tackles including four solo stops on the year … Made his WCU debut and first tackles for the Purple & Gold in the season-opener against Newberry (Sept. 1), posting a pair of tackle assists … Tallied a career-high seven tackles including four solo stops against Wofford (Nov. 10).

Prior to Western Carolina: Transferred to WCU from Georgia Military College prior to the spring, 2018 semester … Over two seasons at GMC, played in 21 games and recorded 68 total tackles including 56 solo stops … Played in 10 games as a sophomore at Georgia Military College, finishing second on the team with a career-best 49 total tackles including 29 solo stops and a tackle for loss … Was among the team leaders with three interceptions, returning one 34 yards for a touchdown in a win over Hocking College … Also added a fumble recovery … Posted a total of 10 pass break-ups over his two seasons; High School: Tabbed All-Region twice including a first-team honor as a senior in 2014 after collecting an honorable mention as a junior … Was named honorable mention All-Middle Georgia at safety in 2014 ... High school coach was George Collins … Also participated in track & field as a prep, going to the 2015 state meet in the triple jump and 300m hurdles while also holding the Rutland HS school-record in both (300m hurdles, 39.55 & triple jump, 47’7”).

Personal: Is the son of Teresa Bawn.

Montana #26 not assigned. Here's a recruit… 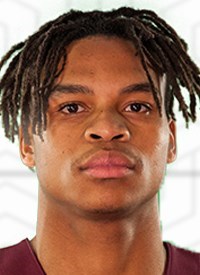